Atmospheric particles that can be natural or anthropogenic, are defined as a suspension of fine solid or liquid particles in air. They are either emitted or formed in the atmosphere and their particle sizes affect their transport and deposition. Their most important impacts, such as respiratory health hazards, visibility reduction, and climate effects are dependent upon the particle size that ranges from a few nanometers to a few hundred micrometers. Chemical composition of aerosol particles is generally determined by gas- and liquid-chromatographic techniques, mostly with mass spectrometric detection. Use of liquid chromatography (LC) has increased in atmospheric analysis due to the recently recognized importance of highly oxidized compounds in aerosol formation and growth, improved separation efficiency of the columns, and high-resolution mass spectrometric detection.

Sample preparation techniques used for solid samples, such as extraction, clean-up, and concentration, are also suitable for aerosol samples, in general. The analysis mode (target, nontarget) and analysis technique determine the choice of sample preparation method. Liquid extraction, assisted with temperature, pressure, ultrasound, or microwaves, is frequently used (Table 1). Soxhlet extraction, which gives the best recoveries, is less used, because of long extraction time and high solvent consumption. Sonication, instead, is the most popular due to cheap instrumentation, low solvent consumption, and short extraction time. Concentrations of aerosol constituents are relatively low; thus samples are usually concentrated after extraction with nitrogen flow.

Table 1. Examples of Sampling and Sample Preparation Methods for the Analysis of Different Compound Classes in Atmospheric Aerosols2

Generally, RPLC separation with detection in negative ion mode are utilized for the determination of OS. High-pressure liquid chromatography-electrospray ionization-quadrupole time-of-flight-mass spectrometry (HPLC-ESI-QTOF-MS) is employed to investigate the influence of anthropogenic emissions on the formation of SOA and specifically OS.

A sensitive method for atmospheric ammonia was developed by Huang et al. where in-line derivatization with o-phthalaldehyde (OPA) and n-acetyl-cysteine (NAC) was utilized to form highly fluorescent sulfonatoisoindole derivatives for HPLC with fluorescence detection. Ion chromatography with cation exchange column (IonPac CS 12 A, 4 mm i.d. × 25 cm) has been utilized for the analysis of dodecyl-dimethylammonium chloride (DDAC, disinfectant used in hospitals) in indoor atmosphere.

Hydrophilic interaction chromatography (HILIC) is an attractive alternative to conventional RP separation, and it has recently become popular for the analysis of amino acids.

Hydrophobic compounds from primary biological sources are relatively easy to analyze from aerosols, because conventional C18 columns can provide excellent selectivity and resolution. However, majority of studies rely on GC-based method, even when derivatization is required. The reason might be a relatively long analysis time needed for LC of fatty acids. It can be reduced dramatically, if for example, chloroform is added to an eluent. However, no application to aerosol particles are published yet.

Because of the diversity of PAHs (over 10,000 compounds), GC has been used for the analysis in the majority of publication. The reason lies in high chromatographic resolution achieved in GC and especially in two-dimensional GC compared to that in LC. However, UPLC coupled to MS is an excellent alternative to the traditional GC approach and has been widely utilized in atmospheric aerosol studies. Since PAHs are aromatic compounds, they are easily detected with UV or FLD, but then selective sample preparation is recommended. Column choice is quite simple, since traditional C18 can be utilized, because of the nonpolar nature of PAHs and their derivatives. High-elution-strength gradients are usually required to minimize analysis time.

On-Line and On-Site Techniques have been developed in recent years and used more widely. High-performance anion-exchange chromatography coupled to mass spectrometry (HPAEC-MS) is used as an on-line analysis method for a PILS sample flow to determine levoglucosan in PM1 with 8 min time resolution. 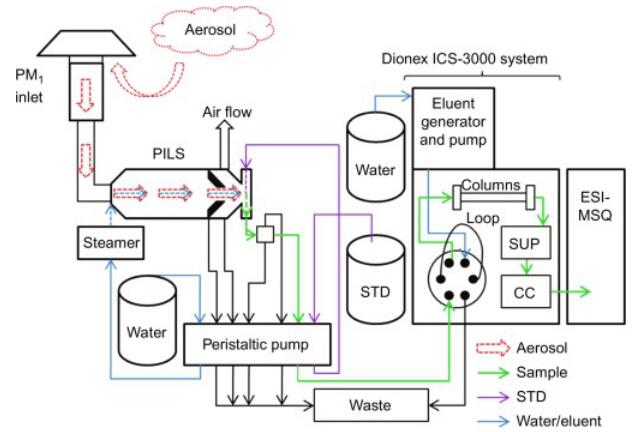 Fig. 1 Scheme of the sampling line and the on-line coupled PILS-HPAEC-MS apparatus2

Another successful application of on-line coupling with mass spectrometric detection, is PILS-SPE-RP-HPLC-MS (ion trap) system. In this approach, aerosol-originated organic acids were first concentrated in an on-line solid-phase extraction step, using mixed-mode anion exchange material. After the sampling/extraction step was completed (2 h), analytes were eluted from the SPE cartridge with 500 μL of 10% acetic acid to a C18 column and HPLC-MS analysis was started. Even though valve switching and the start command were performed manually, the system can be completely automated. Sufficient limits of detection were achieved ranging from 0.05 (pinic acid) to 0.45 ng?m3 (adipic acid) for PM2.5.

Chemical composition of atmospheric aerosols has been studied already for several decades. Some aspects of aerosol life cycle, e.g., formation of SOA from biogenic precursor gases, are well known, while some areas, such as brown carbon formation, are yet to be studied. Also, some emerging environmental pollutants of anthropogenic origin transported by aerosols have lately gained our attention. LC, due to its versatility and sensitive high-resolution mass spectrometric detection, has replaced GC in many applications. RPLC, with different modifications, is still the mostly used separation technique, but ion exchange and HILIC are increasingly utilized. For research purposes, off-line techniques are justified, but due to growing demand for high time resolution air quality monitoring, on-line approaches should be rapidly developed.

Alfa Chemistry is a professional analytical testing company, and has long been committed to promoting the long-term development of the analytical testing industry. We sincerely welcome colleagues from all walks of life to come to negotiate and cooperate.