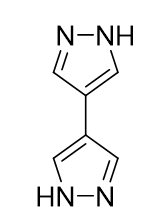 Due to the specificity of the structure, pyrazole ligands, imidazole ligands and triazole ligands have wide applications in biomedicine, agriculture, material chemistry, organic synthesis and analytical chemistry.