(1) Huang Yong et al. investigated the application of chiral alcohols in asymmetric catalysis of these cycloadditions. They demonstrate a simple family of chiral alcohols that use hydrogen bonding to catalyze an important family of cycloadditions of dienes to various aldehydes. Moreover, the reaction is highly enantioselective, yielding only one dihydropyran product per dihydropyran A form of mirror image. This type of catalysis mimics the action of enzymes and antibodies, unlike traditional metal-based catalysts used in organic chemistry.

(2) There is growing interest in developing catalytic asymmetric C-C bond formation processes, of which the Henry reaction is important because of the diverse chemical properties of nitro groups. The Henry reaction relies on the simultaneous activation of aldehydes and nitroalkanes. Claudio et al. reported that a highly enantioselective direct Henry reaction can be triggered by a combination of a simple Zn(II) salt, an amine base, and a chiral amino alcohol ligand, and the reaction scheme is shown in the figure below.

Chiral ligands for asymmetric hydrogen transfer feature various combinations of nitrogen, oxygen, phosphorus, sulfur and even arsenic as donor atoms. They can be bidentate, tridentate and tetradentate.

Chiral ligands play an important role in asymmetric synthesis, such as Reduction of C=O, Reduction of C–C multiple bond, Reduction of C=N and other reactions. For example, the phenyl alkyl ketone PhCOAlkyl is the substrate of choice for evaluating new catalysts in transfer hydrogenation. For a given catalytic system, the rate and selectivity are sensitive to the steric crowding of the substrate as well as to the electronic properties of the benzene ring substituents. 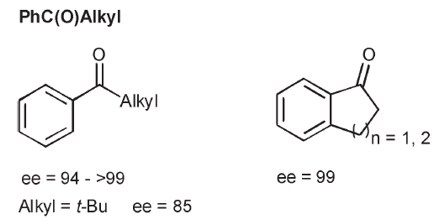