Olefin ligand refers to a type of ligand having a carbon-carbon double bond in its structure. Olefins have a long history as ligands and are widely found in various metal complexes. From the beginning of the simple olefin ligand to the appearance of olefin heteroligands, the types of olefin ligands are becoming increasingly abundant, and most of them are chiral olefin ligands. Olefin ligands exhibit high catalytic activity and stereoselectivity in asymmetric reactions and are therefore mainly used in the field of organic synthesis and the synthesis of a variety of compounds of high optical purity for potential pharmaceutical synthesis and biological activity.

Like other ligands, olefin ligands are not used alone, but rather, they can be combined with metal atoms to form olefin-metal complexes that play a role in asymmetric catalysis. Olefin ligands, which have been developed in recent years, are also widely used in various reactions catalyzed by metals, such as asymmetric hydrogenation, conjugate addition, imine/carbonyl compound addition, allyl substitution, intramolecular hydroformylation, chemical coupling, etc., and achieved very good results in some reactions, efficiently constructed a series of structurally important chiral compounds. 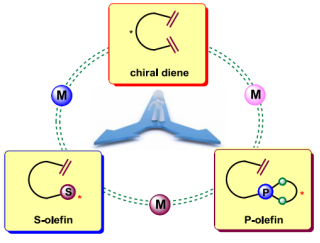