Phenanthroline is 1,10-phenanthroline. A phenanthroline ligand refers to a ligand having a phenanthroline ring in its molecular structure. 1,10-phenanthroline has a planar rigid structure and plays an important role in coordination chemistry; its two adjacent atoms can form a feedback bond with many transition metals, resulting in a stable complex, which is important in many fields. For example, in analytical chemistry and homogeneous catalysis, complexes of phenanthroline with metals can be used as important chelating agents, and many complexes have been used as important electron transporters and chemical nucleases in life science research. Phenanthroline is an excellent electron acceptor with good coordination ability for transition metal ions, especially for low-valent metal ions. The introduction of the second ligand phenanthroline in the multi-component complex not only increases the stability of the complex, but also may result in novel materials with novel properties and structures. Many novel ligands can be obtained by introducing a substituent and a functional group at different positions of phenanthroline by nucleophilic substitution or electrophilic substitution. The introduction of these novel ligands into supramolecular systems such as calixarenes, crown ethers, fullerenes and cyclodextrins has revealed many novel structures and properties. Many novel complexes show good electrochemical, catalytic and photochemical properties, and also show good application prospects in antitumor activity. 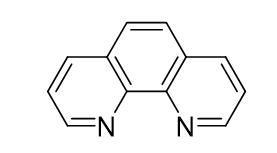 Due to the specificity of its structure, phenanthroline ligands have broad applications in optical materials, organic chemistry and biomedicine.