Porphyrin is a general term for homologues and derivatives formed by substitution of different substituents at positions where the outer ring of the porphin can be substituted. A porphyrin ligand refers to a ligand containing a porphyrin ring in a molecular structure. Phthalocyanine is a generic term for homologues and derivatives formed by replacing four median carbon atoms of a porphin ring with a nitrogen atom and then replacing it with four different benzene rings on the outer side of the four pyrrole rings. A phthalocyanine ligand refers to a ligand containing a phthalocyanine ring in a molecular structure. Both the porphyrin ligand and the phthalocyanine ligand belong to the large π conjugated system composed of 18 electrons, and thus have similarities in physicochemical properties. In general, porphyrin ligands and phthalocyanine ligands are solids with higher melting points and darker colors, and are relatively stable to light, heat, and strong acids and bases. Their most prominent chemical properties are the ability to react with metal ions to form complexes. The properties of the complexes formed are also varied depending on the metal ion radius, valence, and coordination number. 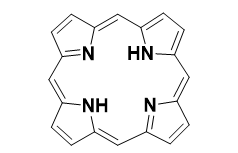 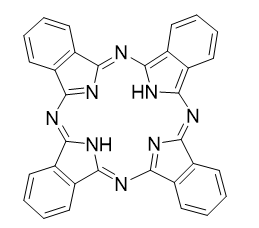